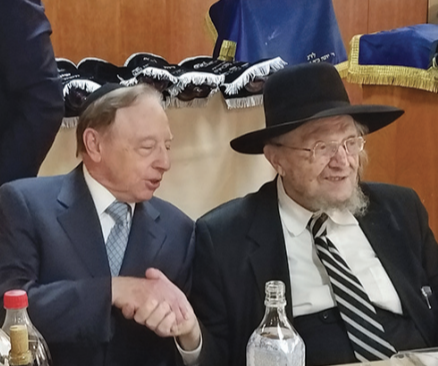 By Jack Forgash, as told to Michal Rosenberg

Rav Dovid Feinstein, was the rosh yeshiva of Mesivta Tiferes Jerusalem on Manhattan’s Lower East Side. He was a renowned Torah scholar and halachic authority for Jews around the world. He passed away last week at the age of 91. What follows is personal reflections from one of his many talmidim.

I was a student in MTJ in 1960. After high school my father sent me there to learn because of Rabbi Moshe Feinstein. There, I learned Talmud, but I also learned how to deal with people. I met Rav Moshe at my interview and was put into Rav Dovid’s shiur, who was first starting to teach classes in the beis midrash. I was in his shiur for two years.

There were 20 of us, and our interactions were that of a rebbe and talmid, but also like a friendship, with all the chavrutot and learning together.

When I went to college I continued at MTJ in between classes. Sometimes I would drive Rav Moshe home for lunch because I was the only one with a car.

I formed Just One Life in 1988, an organization that supports pregnant women in Israel who are in crisis, such as single mothers, women getting divorced while pregnant or who got pregnant while in the army. There are many halachic questions that come up when dealing with these is sues, and I would call Rav Dovid when I had a question. He became the rabbinical authority for Just One Life, along with Rav Pam.

I would bring photos of the babies and their mothers to show Rav Dovid when I would visit the yeshiva and he would smile and ask questions about the mother’s situation. He would ask me to show the photos to Rebbetzin Malka and would tell me later that she enjoyed seeing them.

Ten years ago, Rav Dovid asked me to join the MTJ board. I asked him, “Rebbe, it’s 50 years later! Why are you asking me now?” He answered me, “You’re family and family should stick together.” So I joined, and sometimes at board meetings, when I would contribute an idea, he would say, “I like that.”

The main lesson I learned from Rav Moshe and Rav Dovid was chesed. The way they would greet everyone at the yeshiva—there was an open door. People came from all walks of life, every type of Jew—and even non-Jews! Rabbis from the OU, Agudah, Young Israel, Torah uMesorah, all came to the yeshiva to ask questions to Rav Moshe and lat er to Rav Dovid. He was always humble, inviting and interested in other people.

A lot of poor Jews would come to collect tzedakah from the students in the beis mid rash, and one day when Rav Moshe was giving shiur a lady came in collecting and was chased out by a bachur. Rav Moshe stopped the shiur, ex cused himself and went out to give the woman tzedakah from his own pocket. Then he went over to the bachur and gave him tzedakah to give her as well.

We used to go across the street to Sam’s Deli for lunch, and Rav Dovid would come in, sit and eat with us. He was my posek, my rebbe and my friend. I looked up to him tremendously.

The Feinstein family, Rav Moshe and Rav Dovid, emu lated the avos in the way they built up Jewish values and the Jewish way of life to where it was before the Holocaust.

Like Avra ham, their chesed was unbelieva ble. Like Yitzchak, they had gevurah. Rav Dovid had the strength to carry on his father’s mis sion and togeth er they carried the world Jewish com munity on their backs. They wer en’t just roshei ye shiva, but roshei klal Yisrael.

And like Yaakov, their To rah was known throughout the world and it uplifted the Jewish poeple after the Hol ocaust and continues to this day. [Artscroll, the household name that disseminates To rah throughout the world, was born in MTJ, with Rav Dovid encouraging his great friend, Artscroll founder Rabbi Meir Zlotowitz, and giving his haskama on many sefarim.]

After watching the funeral on Zoom on Sunday, I went to the airport to say goodbye to Rav Dovid: my rebbe, my adviser, my friend. Rabbi Feinstein and Jack Forgash shaking hands. Rabbi Feinstein, center, with Jack Forgash, left, and his son Elliot Forgash, at Elliot's wedding.

Rabbi Marty Katz has been saving lives in Israel for 30 years – as a part of his work with Israel-based non-profit Just One Life (JOL), he has saved 17,500 babies, including several sets of twins and triplets and even a set of quadruplets who are now 20 years old. It is this work of saving lives through counseling ambivalent, expectant mothers deciding whether to terminate their pregnancy that Katz has become an ally and personal friend to some of the biggest names in the American Evangelical world, such as Pastor John and Diana Hagee, who he says are “amazing people” with great influence over Washington. Not only do they exchange Shabbat (Jewish sabbath) greetings every week, but Pastor Hagee, founder and national chairman for the largest pro-Israel grassroots organization in the United States, Christians United for Israel (CUFI), has ‘put his money where his mouth is,’ supporting JOL with hundreds of thousands of dollars over the past several years and setting an example for other Evangelical churches who have followed in their wake. This year, Katz accepted a gift of $100,000 from John Hagee Ministries at his 37th Annual “A Night To Honor Israel” event at the Cornerstone Church in San Antonio, with Hagee’s Rabbi and Katz’s good friend Rabbi Aryeh Scheinberg. At the forefront of saving Jewish lives in Israel, JOL has gained respect, receiving its financial assistance from dedicated supporters around the world, and in particular, Evangelical Christians who are invested in creating a flourishing Jewish state and supporting the children of Israel. Receiving funds from Pastor George and Cheryl Morrison of the Faith Bible Church in Denver, Pastor Sharon Dougherty from Oklahoma, Pastor Ron Lewis from North Carolina, the Grace Covenant Church of Virginia, the Solace Church in Oklahoma and Pastor Reymundo Meneses of the Life Church of Memphis, their support allows the organization to provide their clients with the security to make critical future-focused decisions for themselves and their families. Doing so relieves burdens before and after the baby arrives, and with this clarity and confidence provided to the client, JOL has saved thousands of lives of women and families in crisis – what a cause! Saving ‘Just One Life’ For the Jewish people, the desire to save lives stems from a central text of rabbinic Judaism. The Talmud states, “Whoever saves a life, it is considered as if he saved an entire world.” JOL and its team of professional social workers who empower women who find themselves in a crisis situation during pregnancy have thus saved thousands of worlds, acting as cause-leaders. “We are willing to do nearly anything to save just one life,” Katz told Breaking Israel News. “We can help pay a woman’s bills and rent, offer parenting workshops, support and even train spouses who need another job to pay for a baby.” Doing so creates dignity for a family and is not a simple band-aid over a financial issue, but a longer-term investment into the future of the family. “In the absence of the support of others, we are here to reach out with an emotional and loving hand,” said Katz. By assisting mothers with challenges ranging from mental health issues, medical problems with the pregnancy, abuse, poverty and more, nearly all the women JOL sees – women who were considering abortion – to keep their babies. Such values and programs have garnered the organization great financial support from both Orthodox Jewish and often right-wing, pro-Israel Christian donors, including Evangelical Christians whose ‘pro-life’ agenda aligns with the Jewish value of saving lives. “The Evangelicals say we are doing holy work. They love us, they love the holy land and they love Israel,” maintained Katz.  “We are tied to the Evangelical Christians.” A Pro-Chance Stance According to cause-leader and JOL director Bini Maryles, however, Just One Life does not want to be labeled as ‘pro-life’ or ‘pro-choice’ – “We are what we call ‘pro-chance,’” he told Breaking Israel News – “giving every future mother the chance to make great, empowering, knowledgeable, future focused decisions about herself, her children and her family.” Despite some theological differences regarding the definition of life between Orthodox Jews and Evangelical Christians, Donna Jollay, co-founder of educational platform Yeshiva for the Nations, which aims to revolutionize Christian thinking about the Torah, maintains that Jews and Christians both value life, treating it with honor and dignity – and this is just one of the shared values that have led to the natural alliance between Christians and Jews in supporting Just one Life. The children of Israel, both Jews and Christians believe, are at stake and it is up to them to ensure its flourishing. “Certainly, by Christians supporting Just One Life and other organizations that promote life, we are continuing our shared work that is based on our value for life and vision for the future,” said Jollay. Originally posted on Breaking Israel News